The government’s big statement about Navratri has come against. There is good news for the players. Sheri Garba will be held when it is possible that even a big Garba may be sanctioned after October 15. Nitin Patel has made a big statement in this regard. 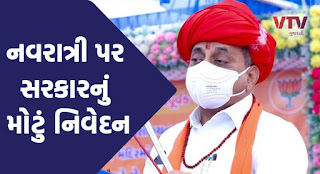 An important statement made on Navratri
Important statement given by DYCM Nitin Patel
According to the new guidelines of the government, Garba-Nitin Patel can be held with 200 people
News of relief for the wrestlers has come in the face of street riots. In Unlock 5, 100 people have been given concessions for religious occasions and with the permission of 200 people, the idea of ​​holding Garba is under consideration, said Nitin Patel. According to the government’s new guidelines, Garba is likely to be held with 200 people.
It may be mentioned here that in the guideline of Unlock 5 of the government, each state and union territory will be able to decide on the presence of more than 100 persons in social, educational, entertainment, cultural, religious, political gatherings and meetings outside the containment zone. The decision will remain in force till October 15.
Read News in Gujarati : Click here